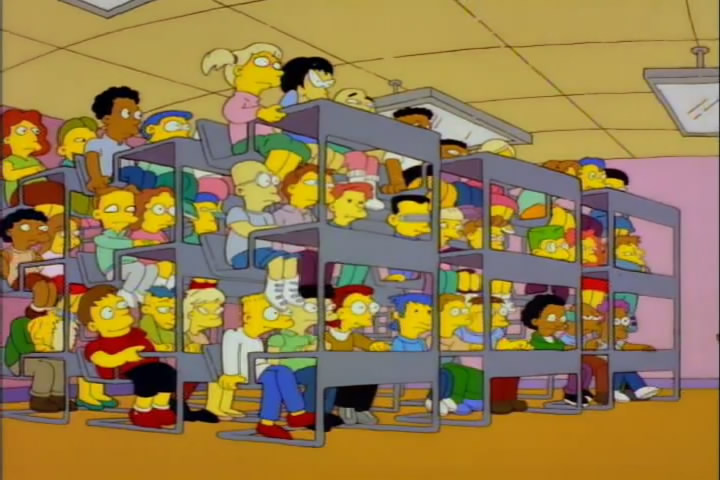 An opinion piece on education? I know. Don’t worry this is less than a thousand words.

In rich countries the education system we currently have is frequently and enjoyably criticised from every angle1)Leaving higher education to one side, early childhood, primary and secondary education is an area I have some expertise in, having been a secondary teacher for almost a decade and having gone through phases of intense research into educational outcomes.. But it’s important not to be too cynical. Our 2)I’ll use Australia as an example but it’s a fair stand-in for other developed nations at least at the general level industrial schooling model is the utopian dream of 100 years ago: we have free education from ages five to 18, six hours a day, 200 days a year provided by tertiary trained professionals, gender discrimination is on the way down, playgrounds contain few hazards, teachers are forbidden from using corporal punishment or sexual molestation and students are encouraged (especially in high school) to express themselves, pursue some interests and develop as people. Although reformers generally talk about an “education revolution”, or the integration of new technology, or a rethink of the student’s role in learning, I think there’s a lot of strong points in our system and revolutions should be based on evidence (of which we have very little).

In short, the system is truly laudable by historical standards, but has plateaued since the 1970s.

I think there are two big improvements that need to be made to the system and — because we still have a shocking and ironic lack of knowledge about how education works — three problems with the public debate on this topic.

Three problems with the debate

Education is seen as a panacea for society’s other ills such as inequality, welfare dependency, poor health outcomes, etc. But unless we refocus onto pre-school education, low educational attainment will remain a symptom (rather than the cause many assume it is) of socio-economic deprivation. This may require programs for parents to help them read to their kids, provide them nutrition and expose them to language. It may require a shift to compulsory pre-schooling. Or, probably, the status quo will continue which will see the excellent operation of a gigantic system designed to distract kids and parents while it lurchingly reproduces social stratification with impressive fidelity6)Subjoinment added 16-09-15. Education is frequently seen as a good to be consumed, particularly by economists, and it certainly is. Higher education is especially amenable to such analysis because people have some degree of choice over which higher education product they purchase, firms compete and occasionally they even respond to demand, such as the recent advent of MOOCs. But in the case of primary and secondary schooling such analysis breaks down because the consumers aren’t the consumers: parents put their kids in school where they are provided a valuable service but are not invested in its uptake. Even when people know that education is good for them and are willing to pay for it, they still frequently spurn its offerings. Worse still the consumers whose lives could be most helped by the education product are the ones least interested in its provision — even though it’s free. This makes schooling difficult to analyse with traditional policy tools because there is a class dimension and also a lack of autonomy on the part of the consumers (children). However, we mustn’t veer off into a reactionary cultural studies approach, all too prevalent in teacher training courses. Instead we need a mixture of empirics and lots of experimentation. The space of possible educational programs is vast and our exploration of it negligible. Maybe young children would learn better with iPads, maybe in groups of five, maybe only in the afternoon, maybe after they’ve had protein rich meals, maybe by rolling all subjects into one, maybe with gamification, maybe in boarding schools, maybe in song and dance, maybe with the help of study drugs, maybe some optimal combination of the above, maybe some methods work for certain kids not others, and on and on. What is known is that the total cost of education reform programs in developed nations since the 1970s has yielded virtually no results. At best, policy makers’ efforts seem to have not made schools noticeably worse in that time.