The theory of evolution isn’t complete, what about missing links?

Creationists and advocates of the theory of intelligent design (also known as “ID” or “creationism”) claim that scientists can’t account for the missing links between species and their ancestors. Researchers keep discovering new, intermediate species, but creationists point out that there is then a gap between the original species and the new intermediate.

The problem is that sceptics want to see the evolutionary sequence without any gaps. Well, it’s theoretically possible, although practically difficult to satisfy them. To provide watertight evidence of an unbroken chain of evolution from, say the earliest mammal to Homo sapiens, one needs to observe all the steps and because evolution occurs by random mutation, one really needs to be there for all the steps, from each generation to the next.

So we simply need to arrange for a procession of every single mating pair of the relevant organisms to pass in chronological sequence, before the eye — at the point of insemination — of the creationist in question. Only by observing the ejaculate events of all copulating pairs in the 39 million generation lineage from the earliest mammal to the first Homo sapiens, will the creationist’s heavy burden of proof be relieved.

But to truly guarantee that these inseminations are the ones that precipitate the birth of the ensuing offspring, one need also observe the actual birth, but thankfully not the lengthy gestation in between. This could be achieved, but only with excellent organisation in what amounts to a veritable Noah’s Ark of sex. After a mating pair was brought in front of the observer, pre-fitted with an intravaginal endoscopy, they would be rotated behind, the spent male discarded and the female kept in captivity for weeks or months, until she starts crowning, only to be brought back in front of the discerning creationist to look upon the disgorging of the foetus in a final verification of the genetic legacy from one generation to another.

Because 39 million generations of even brisk orgasms and parturitions will take some time, a truly dedicated Christian voyeur will be required. Assuming a stalwart protestant work ethic yielding 14 hours a day of non-stop observance of mating and crowning mammals (subtracting one seventh of their adult life because it would be anathema to watch thousands of animals coming on the sabbath), it’s possible to fit all this in 92.89 years. 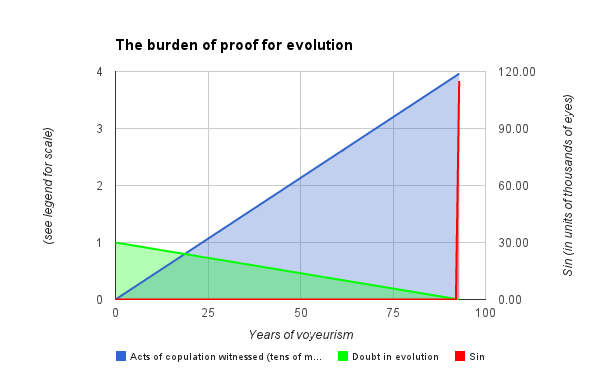 The complicating factor will be that once the organisms being watched approach something resembling a human (say, the emergence of the genus, Homo about 2.5 million years ago), the devout Christian may encounter a scriptural injunction: “Everyone who looks at a woman with lust for her has already committed adultery with her in his heart. If your right eye makes you stumble, tear it out and throw it from you; for it is better for you to lose one of the parts of your body, than for your whole body to be thrown into hell” (Matthew 5:28). As such the only way to continue to watch the carnal acts of proto-human women without damning one’s soul beyond redemption would be to cast away the offending eye. This would lead, in the final stages of the process, to legions of blinded creationists, unless of course they procured bionic eyes: a technological infeasibility and, until the medium term future, highly expensive.

Accordingly our model shows that it is best to observe the acts in a chronological manner, delaying the observation of the Homo genus until a time where the sin can be offset by bionic eyes that have become effectively free in the post-scarcity world, saving $11.5 billion.  However, as part of the observed lineage yourself, you might consider paying the $11.5 billion lest the final image to burn across the photosensitive electrodes of your cyborg eye be the shuddering head of your own father’s penis.

The spreadsheet for calculations in this article can be found at: http://goo.gl/Mt848